Register for the Fall 2021 Prevatte Lectures 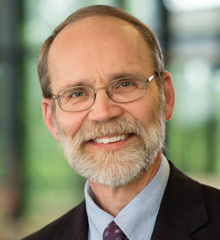 Craig Koester received a B.A. from Saint Olaf College, an M.Div. from Luther Theological Seminary, and a Ph.D. from Union Theological Seminary in New York. He served as a parish pastor for several years in Princeton, Minnesota, and joined the faculty of Luther Seminary in 1986. He was appointed to the Asher O. and Carrie Nasby chair of New Testament Studies in 2012 and served as Vice President for Academic Affairs and Academic Dean from 2013-2018.

An innovative teacher, Dr. Koester is known for his “Genesis to Revelation” course, which uses visuals, music, and drama to take people through the sweep of the biblical story in ten days. His other courses include John’s Gospel, Paul’s Letters, and the book of Revelation. In order to reach a wider public audience, he also developed courses in digital format. One is entitled Apocalypse: Controversies and Meaning in Western History. The other is Reading Biblical Literature: Genesis to Revelation. Both were released through the GreatCourses.

As a scholar, Dr. Koester has contributed to discussions of Scripture in the academy and the church. His books include landmark commentaries on Hebrews (2001) and Revelation (2014) for the Anchor Yale Commentary series. Both have been translated into Korean. In Johannine studies, he is known for his Symbolism in the Fourth Gospel (2nd edition, 2003), The Word of Life: A Theology of John’s Gospel (2008), and numerous articles. He is currently preparing a major commentary on John’s Gospel for Eerdmans Publishing. His book Revelation and the End of All Things (2nd edition 2018) is a popular resource among seminary and college students, and is widely used in congregations.

Dr. Koester has led and organized seminars for the Society of Biblical Literature and Society for New Testament Studies. He has served as associate editor of the journals New Testament Studies, The Catholic Biblical Quarterly, and the Journal for the Study of the New Testament, and regularly presents his work at international gatherings of scholars. He was a scholar in residence at the Center of Theological Inquiry in Princeton, New Jersey in 1992-1993 and 2007.

In the church, Dr. Koester speaks at theological conferences, synod gatherings, pastors’ workshops, and congregations. He is one of the designers of the Narrative Lectionary, which enables congregations to move through major sections of both Old and New Testaments from September through May each year. At the international level, he was involved in the Lutheran World Federation’s project on the “The Bible in the Life of the Lutheran Communion” from 2011-2016.

E. J. and Amaretta Prevatte, long-time friends and benefactors of Campbell University, had a vision. In Mr. Prevatte’s own words, “It was my personal feeling that there was a need for an in-depth study of the Bible that the ordinary degree work did not provide. There should be a place somewhere for renowned Biblical scholars to share their wisdom with our Baptist people, particularly in eastern North Carolina.”

With this in mind, the Prevattes established the E. J. and Amaretta Prevatte Biblical Studies Lecture Series in which was announced in May 1985.